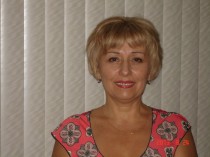 My name is Natalia Shepelyansky.

I am the Master of Sports in Rhythmic Gymnastics and was graduated from Siberian State University of Physical Education and Sports in Russia.

After 10 years of work in Omsk, Russia as a head coach, I prepared 12 Masters of Sports in Rhythmic Gymnastics. My students repeatedly became the winners of many regional, national, and international competitions.

Along with successful Rhythmic Gymnastics coaching, I created bright, original, and well-known dance ensemble “Stars of Siberia” where I was its artistic director.

Throughout 15 years the “Stars of Siberia” had a fantastic success. The ensemble was very popular among the audience, was the winner of the countless regional and national competitions, and its students were even awarded the “Personal Prize of Mahmud Esambaev.”

As a choreographer, I registered in the "Russian Authors' Society" (RAO) and I have compiled more than 100 sport dance compositions that successfully combines the grace of dance, gymnastics and art of using different objects.

In 1993, I became the winner of the 2nd Russian Contest "Teacher of the Year" and was awarded the National Medal “Excellence in Public Education” for my coaching skills.

For many years I successfully collaborate, as choreographer of individual and group exercises, with the "Omsk Training Center Of Olympic Reserve In Rhythmic Gymnastics" under management of the Honored Coach of Russia Vera Shtelbaums.

Many world-known gymnasts were prepared in this Center such as the World Champion Irina Chashina and the winner of two Olympic Games - Evgenia Kanaeva.

For several years I worked as part of the coaching team under the leadership of Honored Coach of the USSR Olga Buyanova who prepared the silver medalist of the Olympic Games in London Daria Dmitrieva.

I was invited to Los Angeles as a consultant to several sport schools to share my unique experience.

With a great enthusiasm I apply all my knowledge, experience and skills in the high standard education of gymnasts and development of this beautiful sport in the United States.

Our philosophy is inclusive: we have programs to suit all tastes, and we're happy to accommodate kids of all ages and skill levels. Whether your kid is looking to explore an entirely new hobby or just try some long-lost dance moves – with Rhythmic Gymnastics Academy you're always in good hands.

Learn more about the classes we offer and some special events we're hosting this year. If you want to get moving, call us at (818) 235-9983 or contact us to sign up today!

Where to Find the Academy

Private Lessons Are All About You!

This is where you will focus on the details be it developing more flexibility, strength or perhaps increasing the level of your apparatus and body technique or often having your new routines choreographed or refined.

All Programs are taught by highly qualified instructors with Master Degrees from Russia.

All news and updates

Get Social With Us